It's interesting the number of places you have heard about, possibly even thought about visiting, but never actually got there. For me, O'Reilly's is one of those places. It's situated in a rain forest on top of a mountain close to the border of Queensland and New South Wales. In many ways it is similar to Binna Burra which I blogged here. O'Reilly's is on the next ridge west of Binna Burra and there is a 23 km walk between the two locations that I keep threatening to do one day. 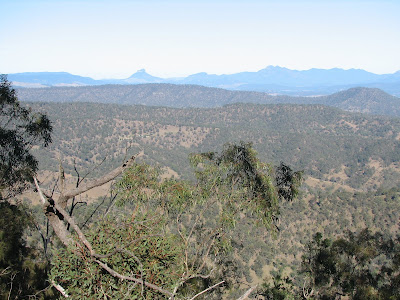 The road up to O'Reilly's heads south from the small town of Canungra and quickly climbs a ridge with wonderful views to the west. 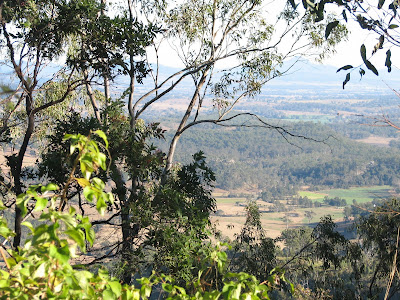 The countryside west of this ridge is considerably drier than what lies east of the ridge. The mountains squeeze the rain out of the clouds coming off the sea. 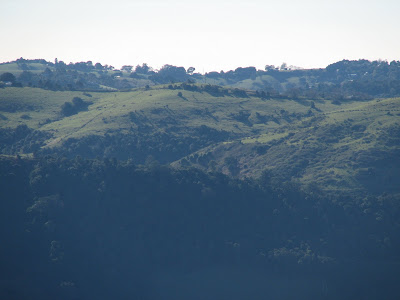 Looking east back to the Beechmont ridge where we stay when we are in the area. 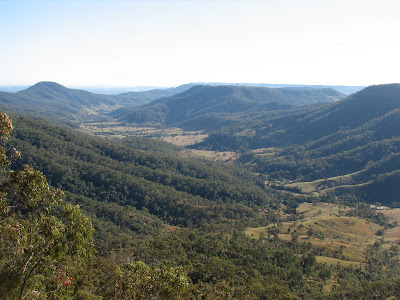 Looking down one of the valleys. 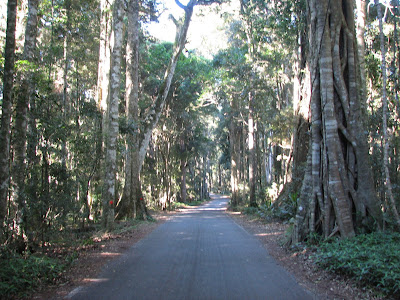 The road is quite narrow in parts with lots of bends and blind corners. Here we are starting to move into the lower part of the rain forest. 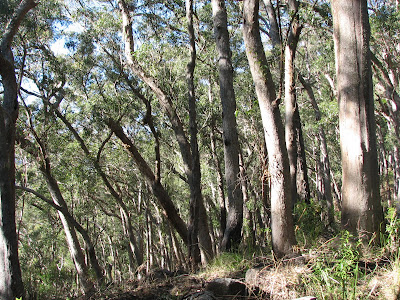 The vegetation changes with altitude. This layer of trees lies just below the rain forest. 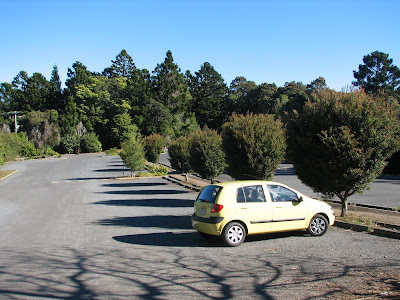 The advantage of going early on a weekday, no crowds. Here is the yellow Hyundai Getz that I rented for a few days. These tiny cars are good on the narrow roads and adequate for a bit of freeway driving, but I wouldn't buy one of these. It seemed to be quite tinny and coarse compared to a Toyota Yaris which I rented earlier in the trip. The Yaris had very little luggage room however. We also rented a Toyota Corolla which was much better on freeway driving.

One thing to consider when driving in Oz is using cruise control to keep your speed down. The police do not give much leeway and it is very easy for your speed to creep up. I find that cruise control is effective in keeping me at the limit. 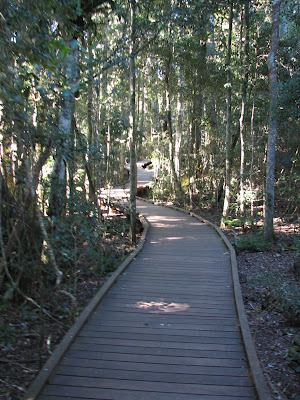 The usual dirt path into the rain forest has been replaced by a raised wooden walkway. It's probably easier for the disabled. 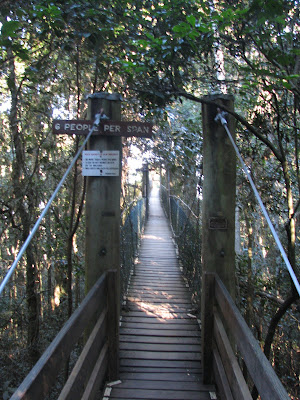 The entrance to the tree walk. 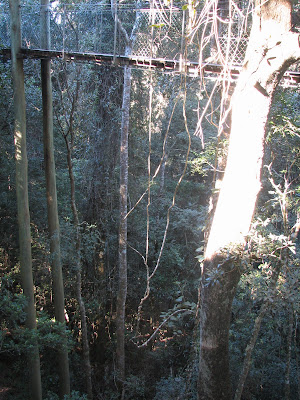 The tree walk is essentially a series of suspension bridges a long way off the ground. The bridges bounce and sway as you walk along them which can be a little disconcerting, but I enjoyed it all. 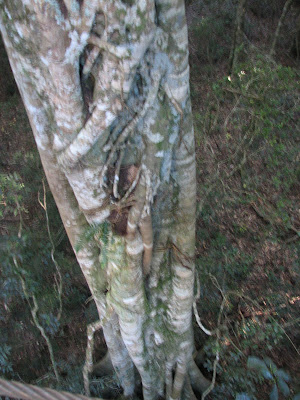 A vine strangling the tree within. Eventually the tree dies, rots and disappears leaving the vine as a shell. 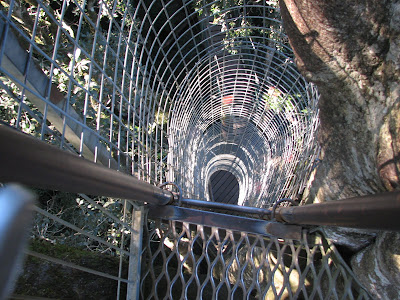 About a third of the way along the walkway, there is a 20 to 30 foot ladder going up a tree to a platform. I decided to climb it and managed to reach the platform which is probably 100 feet off the ground. Here is the view down the ladder which has a safety cage. 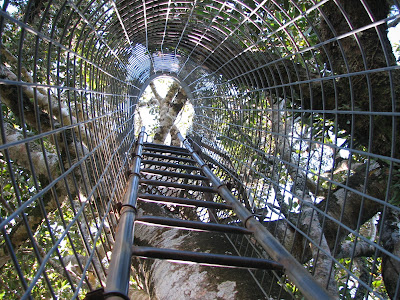 However I could not face the next ladder that went even higher. 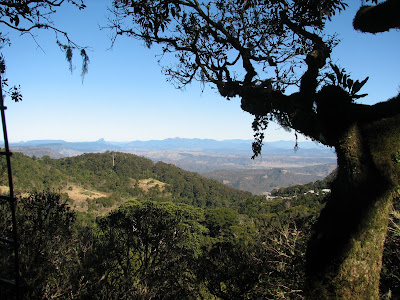 The view from the platform. Perhaps it was worth the scary climb. 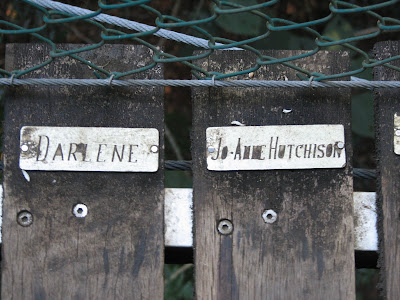 Apparently you can get your name on one of the planks  of the walk, presumably if you donate enough. The total length of the walkway is approximately 160 meters. 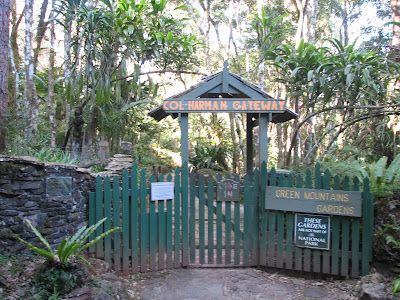 The gate to a set of gardens at the end of the tree walk. 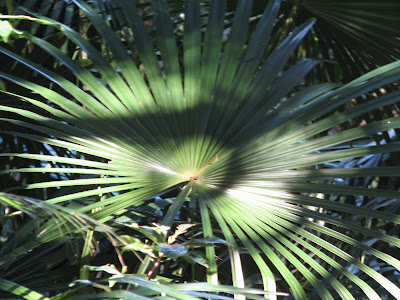 I'm not sure why this set of gardens exists, but it mostly features ferns and plants that are normally found in a rain forest. 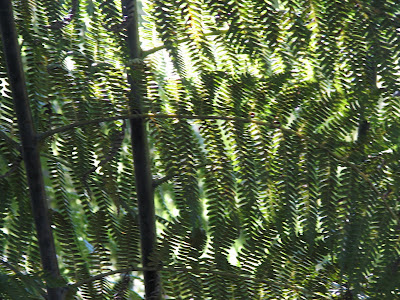 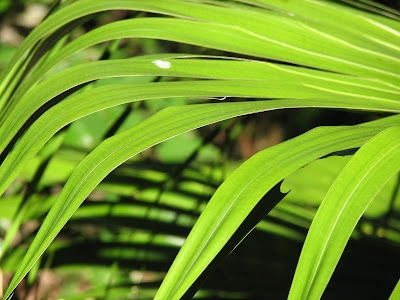 Initially I thought the garden would be interesting because every plant was green. 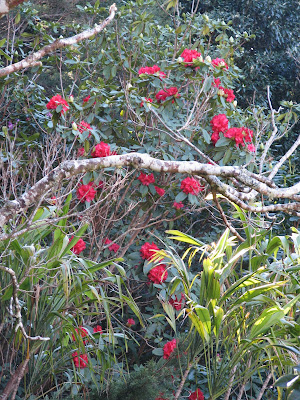 But there are a few plants with reds and pinks. There has to be a logic somewhere, but it escapes me. 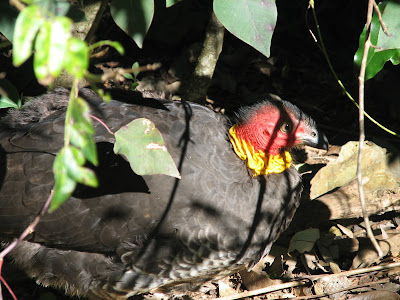 Finally, one of the local inhabitants, a brush turkey. They are quite plentiful in the rain forest but tend to be found near car parks where they scavenge for food.

Next time I am in the area, I will go back to O'Reilly's, particularly to do some of the walks through the rain forest. The drive up is not easy, but it's worth it.