The forecast was for rain in the afternoon so we decided to see something of downtown Portland in the morning. 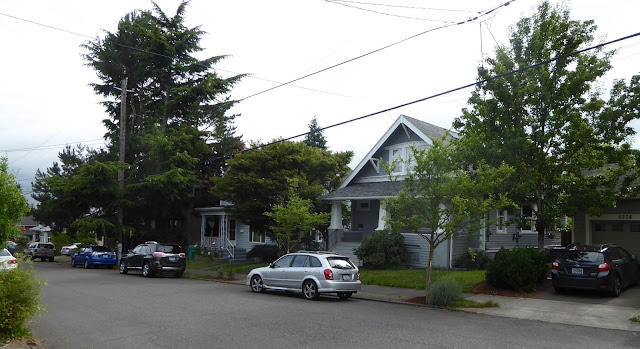 Our bnb is in a quiet neighborhood in north east Portland. 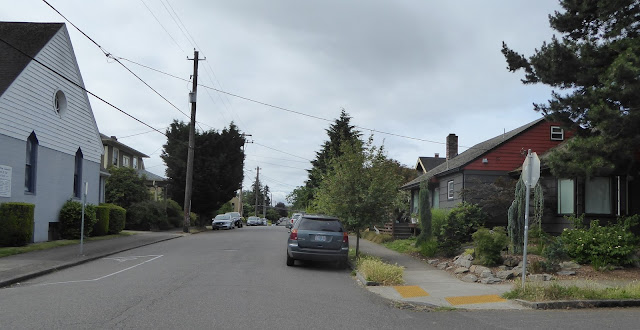 The houses are mostly modest bungalows and the streets are very quiet. 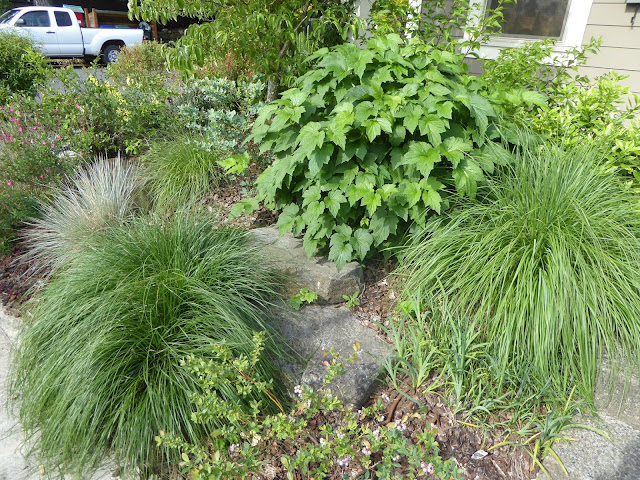 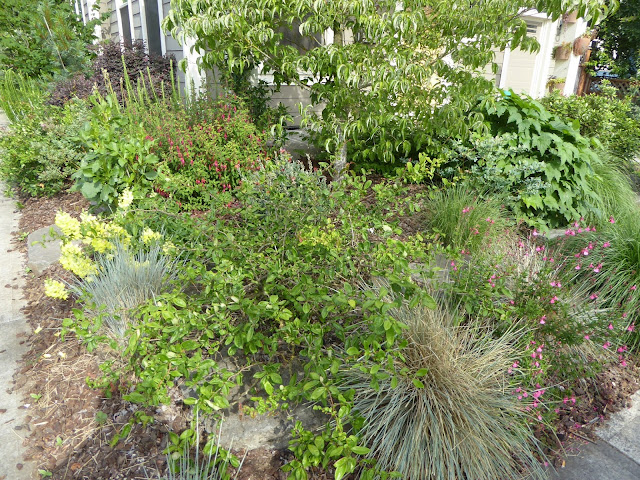 It rains a lot in Portland and it looks like it is very easy to grow just about anything. 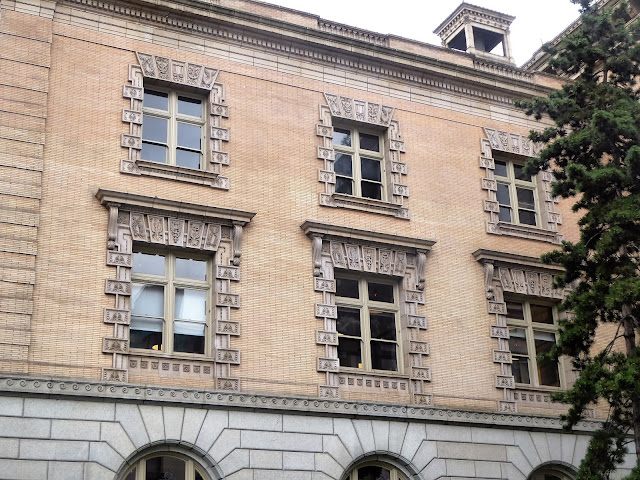 We took the bus downtown. Portland appears to have a very good public transport system and our bus was scheduled every twenty minutes. 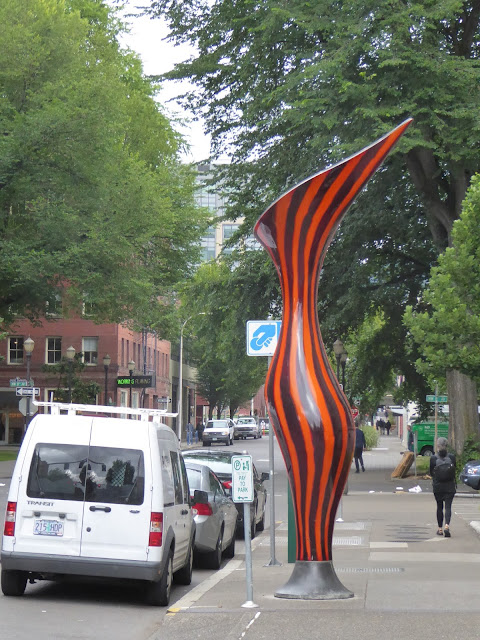 Curious statue near where we got off the bus. 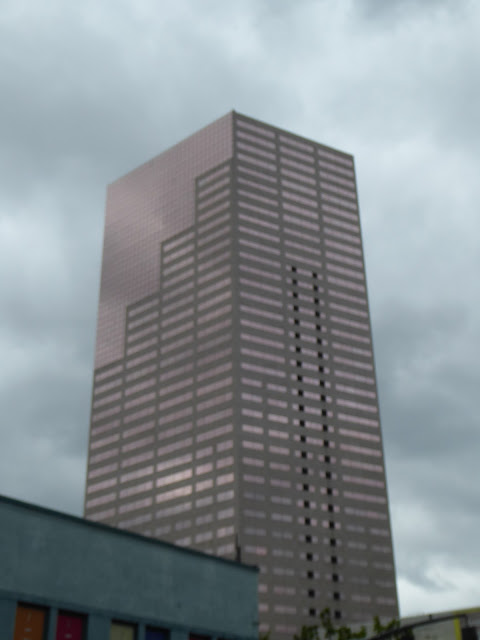 It is known as 'Big Pink' to he locals. 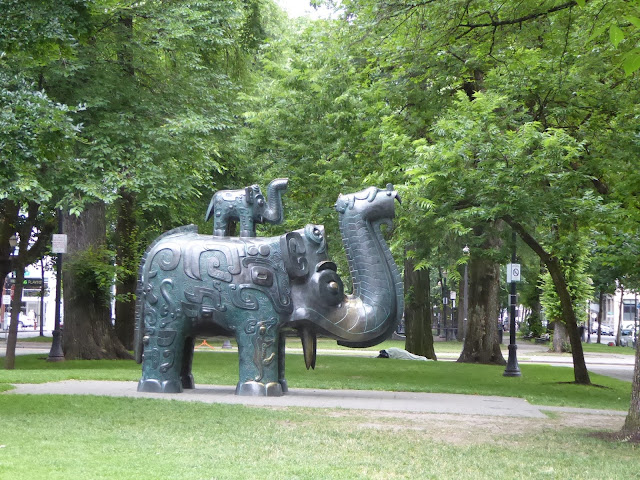 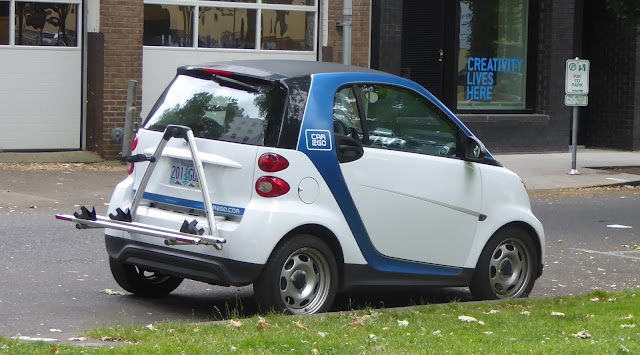 I was intrigued by the bicycle carrier on the back of the Smart car. The car can be rented and you can read more about it here. 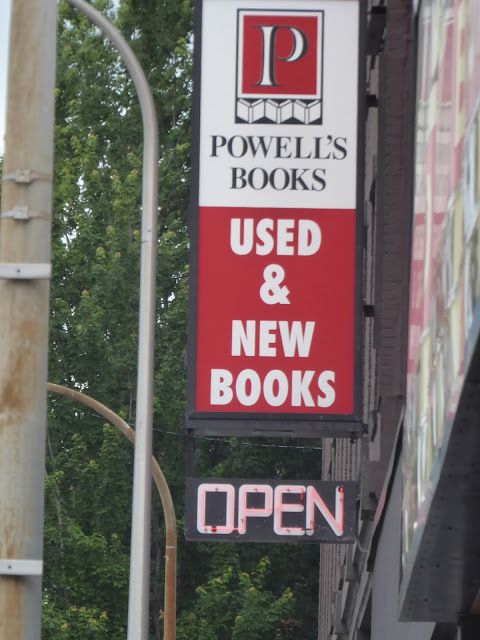 Powell's Books. Supposedly the largest bookshop in the world. 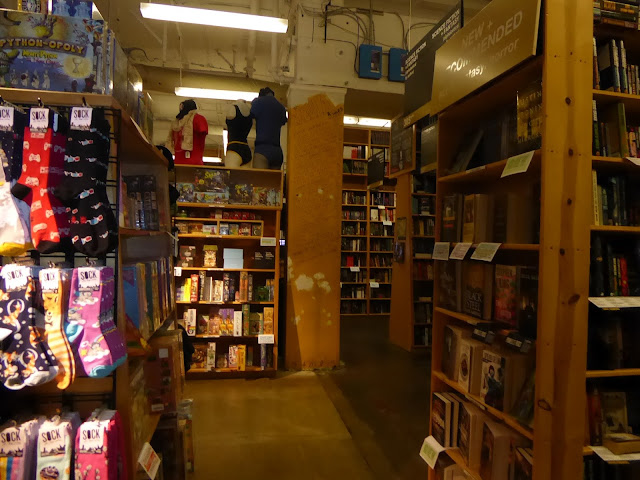 It really is an enormous place. They sell used books as well as new and they mix them together so you don't have to look in different sections. It makes it a lot easier to find a given book.

I actually found a used book to buy. It is about guitar amps. 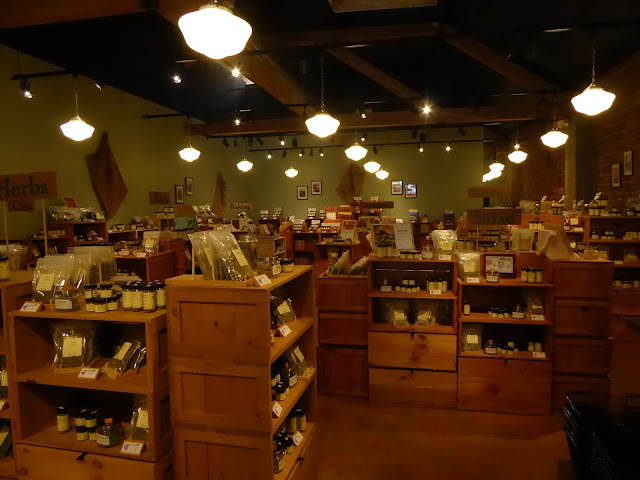 Portland has a Penzeys and I remembered that we needed more tarragon and paprika. I like tarragon in my omelettes and we had run out. We typically get our Penzeys spice mail order.

By the way, Marianne stores our spices in the freezer since they are supposed to stay fresh longer. 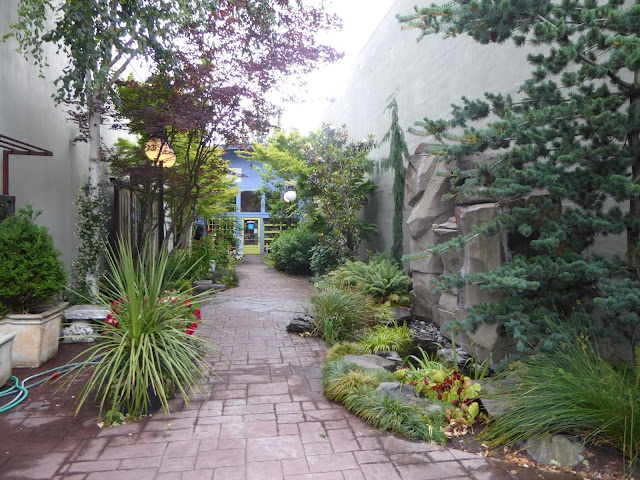 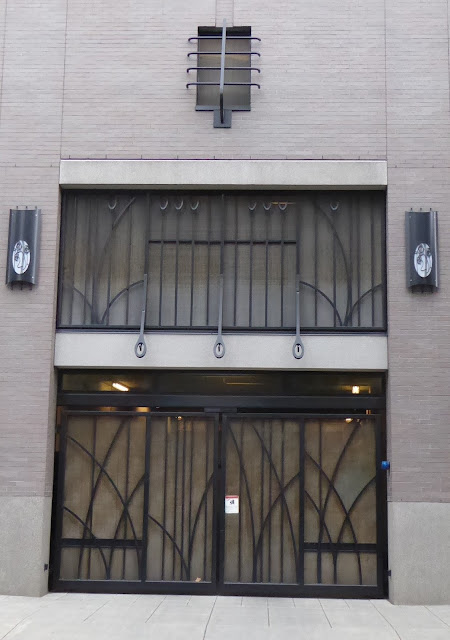 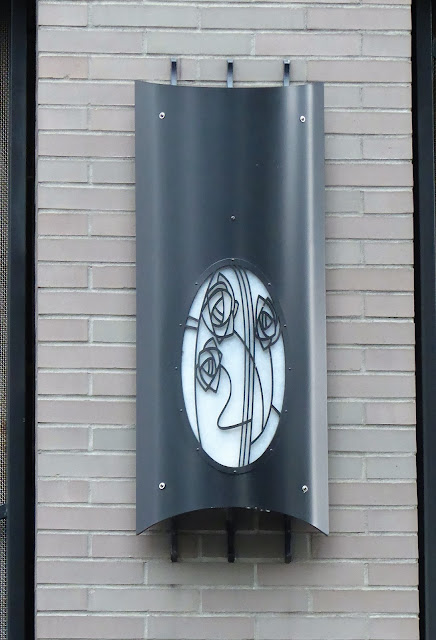 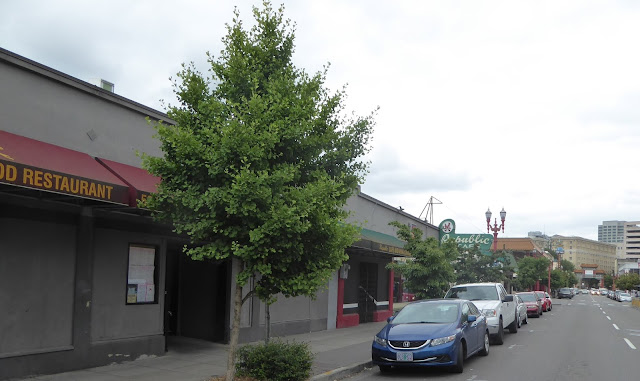 Part of China town. Perhaps it was the gloomy weather but we were not overly impressed with downtown Portland. The streets seemed to be deserted except for homeless people. 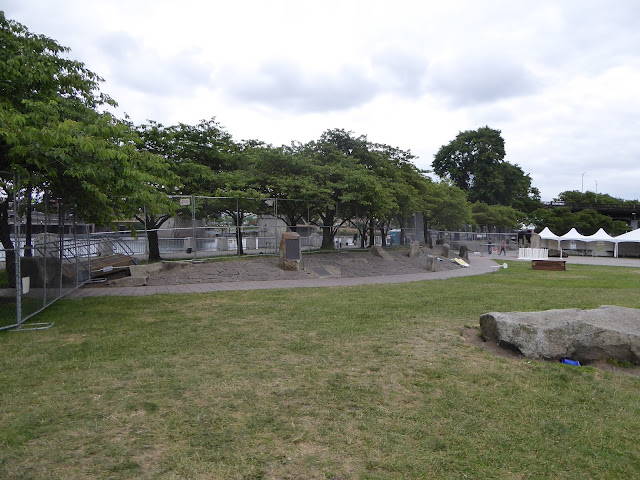 I had asked the sales people at Powells and Penzeys where to walk and both had recommended the river bank. However it appeared that the riverfront was being prepared for an event and there were fences everywhere. It turned out they were disassembling from the Rose Festival that had been held on the weekend. 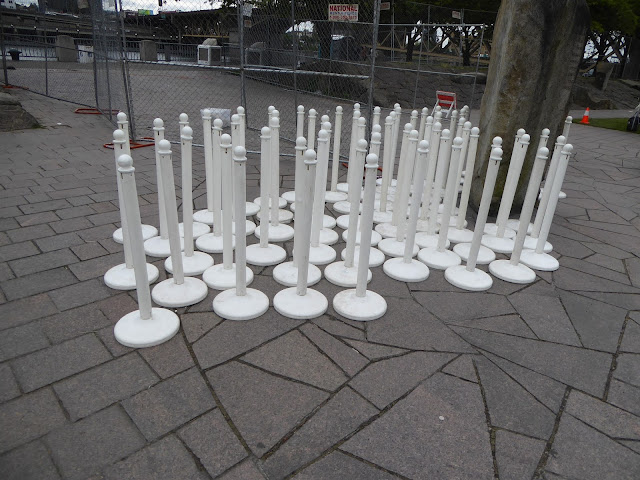 Interesting sculpture. Not really since I think they were to be part of the 'let's fence off the riverbank' strategy. However here we found a gap where we could get to the river. 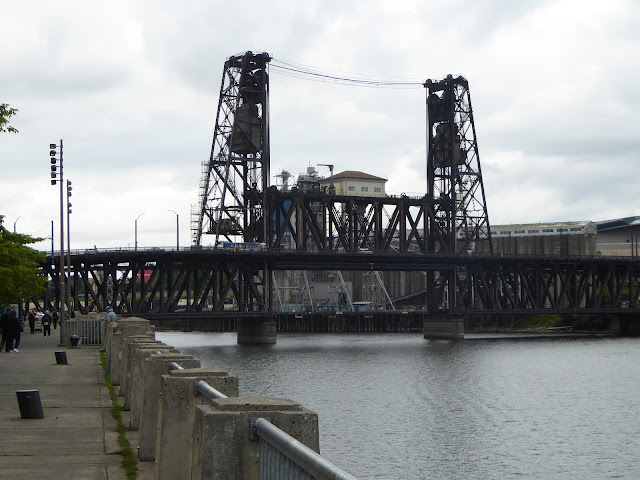 The Hawthorne Bridge over the Willamette River which flows through Portland. It is tthe oldest vertical lift bridge still in operation in the US. 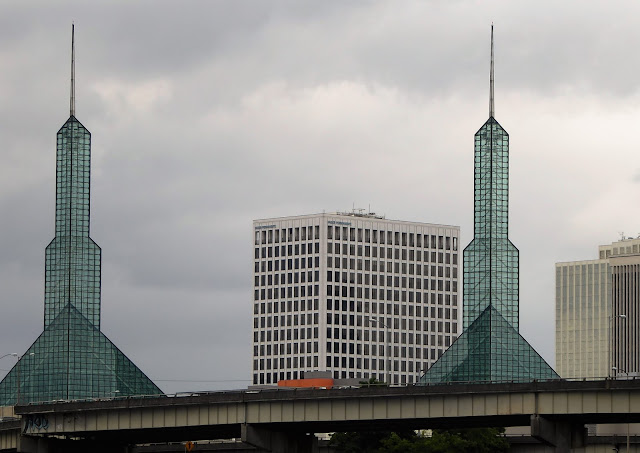 I was quite intrigued by these towers and tried to find out more about them. Our bnb host told me that they were towers above the Convention Center. They are just decorative and our host said they were erected to make the east side feel just as important as the west side of the river. 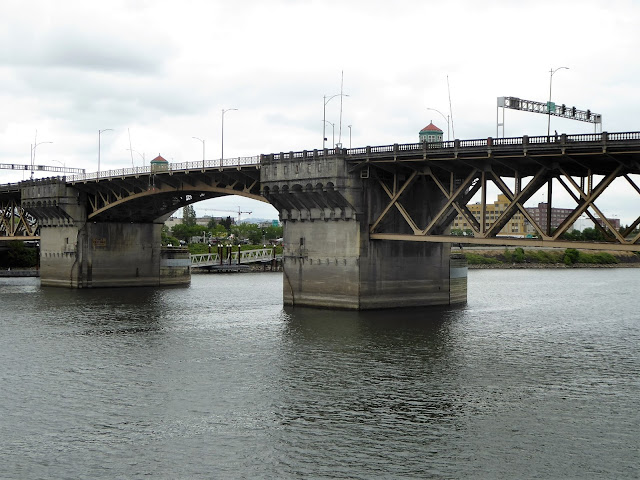 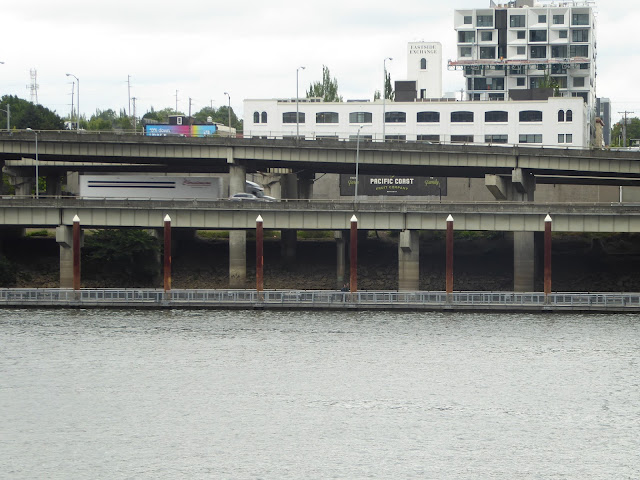 In some ways this reminded me of the Brisbane Riverside Expressway but this looks dismal by comparison. It is amazing what a bit of white paint can do. 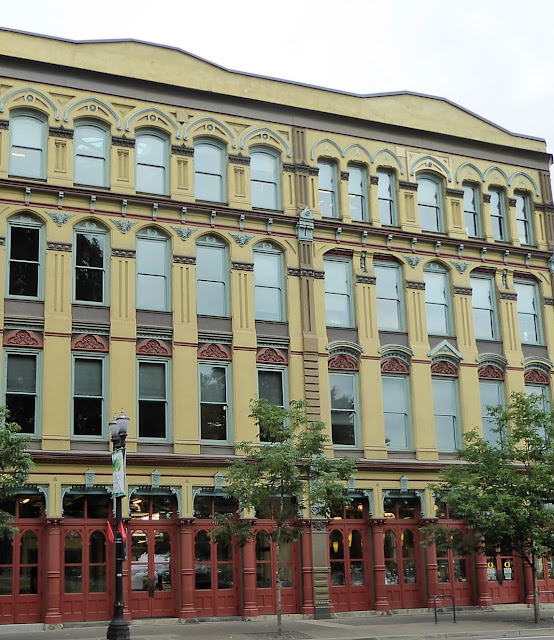 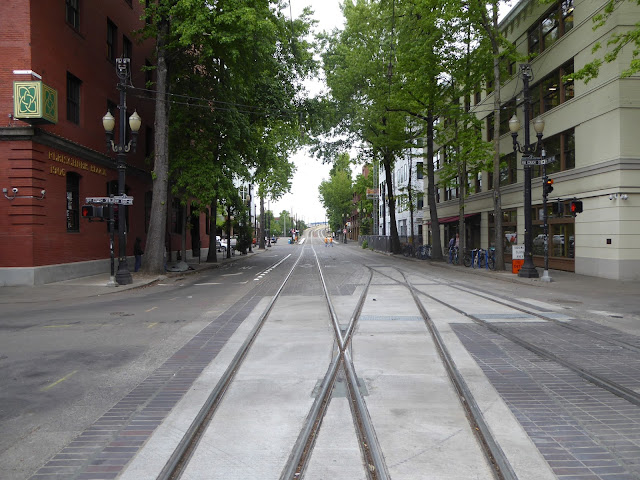 Portland seems to have a lot of trams. 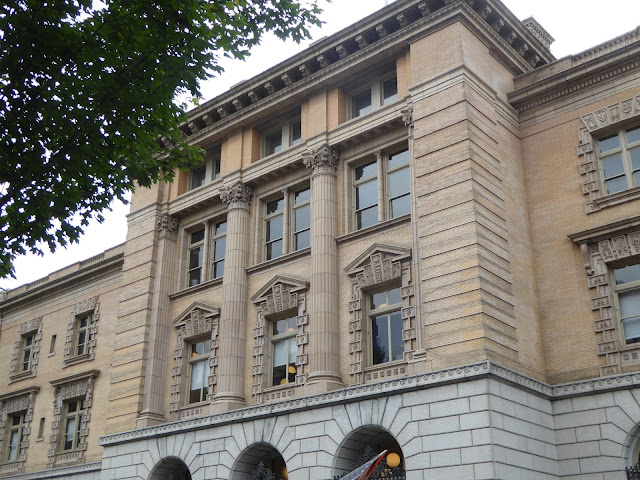 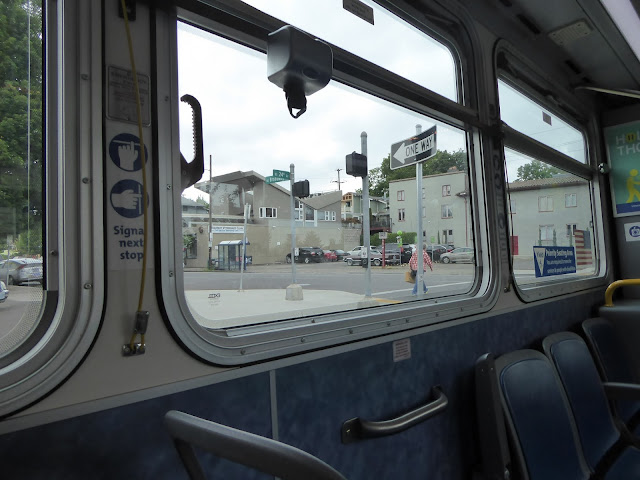 On the bus returning to the bnb. To be honest we were disappointed by what we saw downtown. Perhaps it was a combination of the gloomy skies and the cold wind but there was no vibrancy. Marianne wondered if it was a holiday but the shops were open.