There has been a request for food photos. The food on the Lofoten is themed after the 60's when the ship was built so it's not modern style cruise ship food, whatever that is.

So first we have breakfast which is served buffet style from 7 am to 10 am. 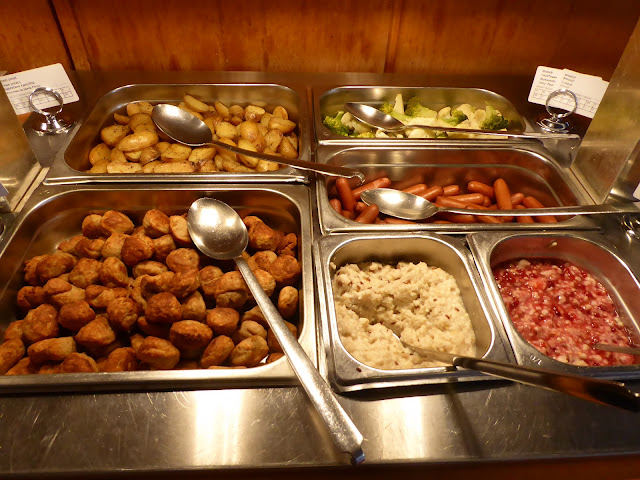 Some sort of meatball to the lower left. 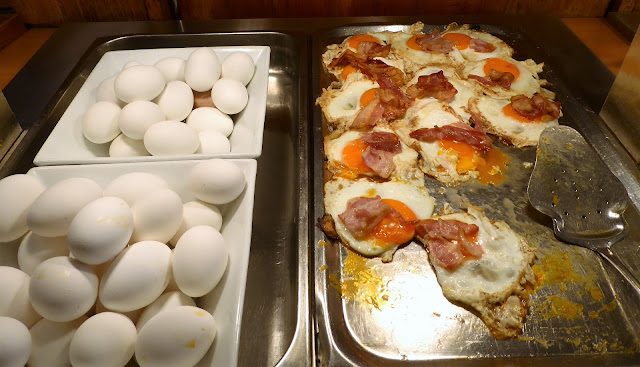 The yokes are very orange but a bit too runny for me. 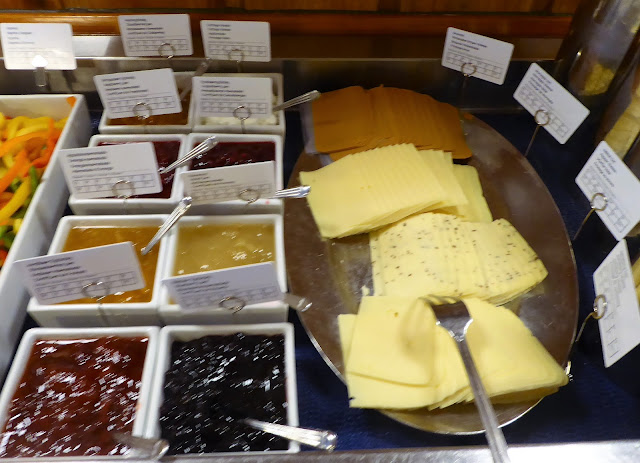 There is also a separate cheese board with brie style and blue cheese. 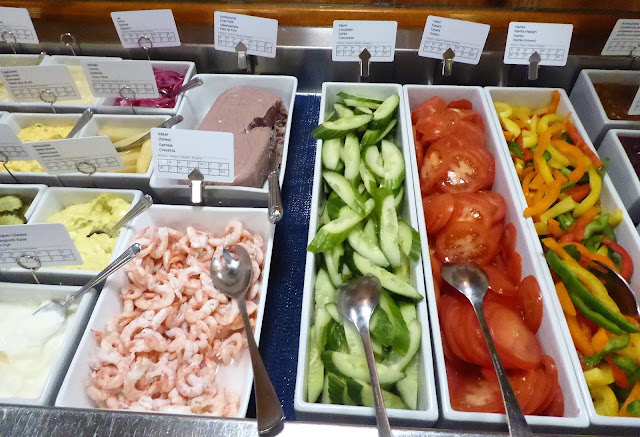 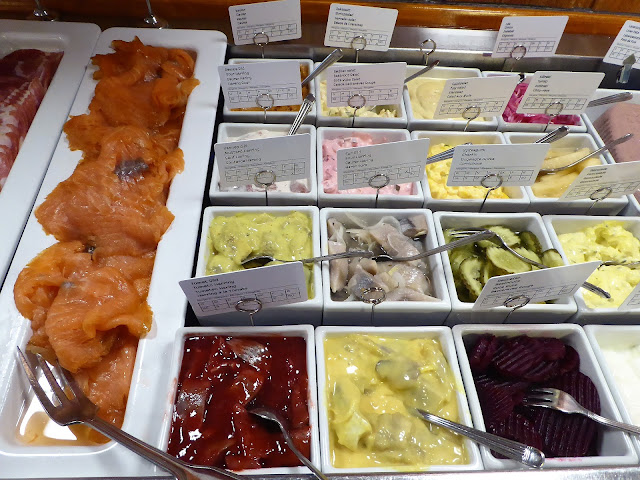 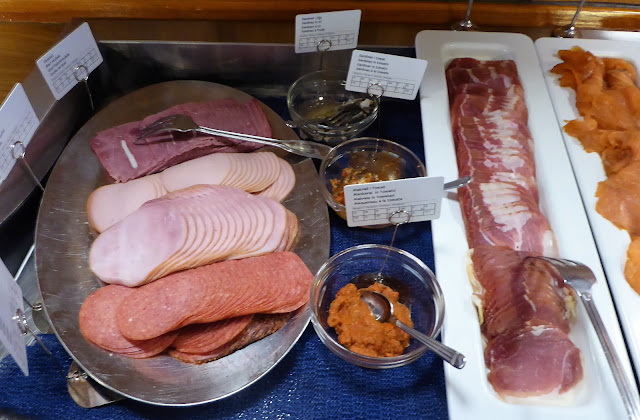 Yes, there is salmon, usually smoked or dried, sometimes both. Not much sign of herring however. Notice the labels in various languages. 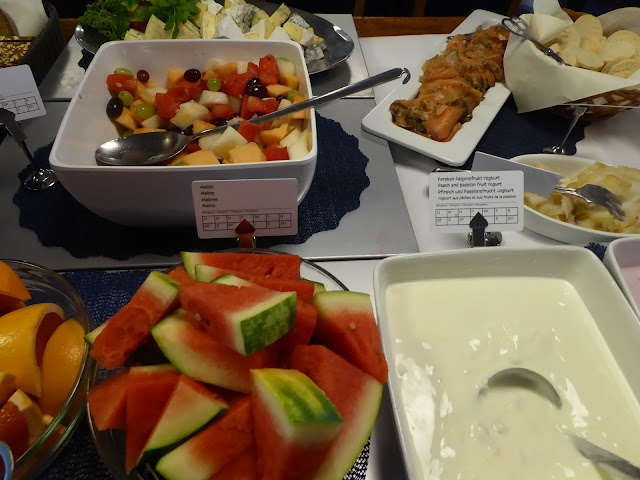 I usually have a big bowl of fruit salad and some yoghurt. 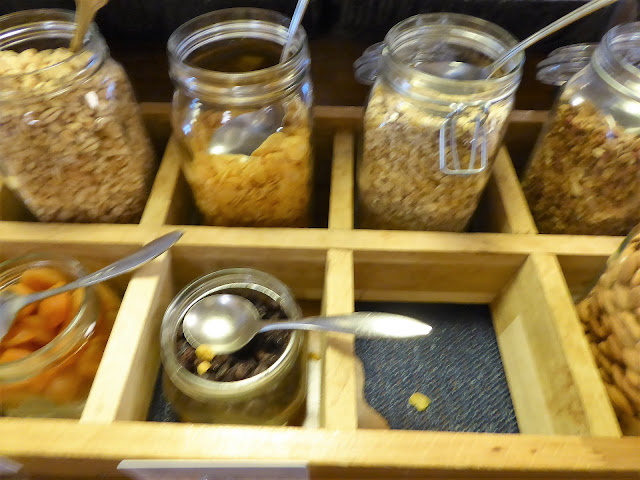 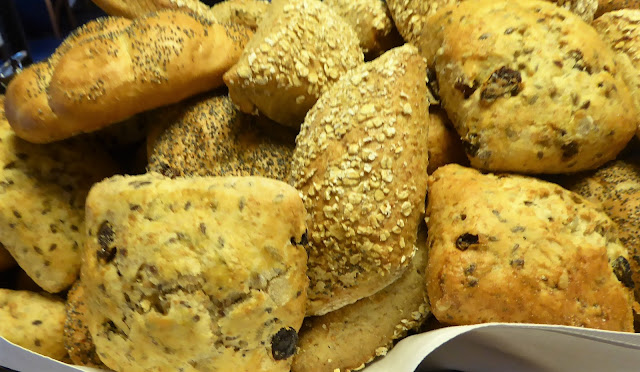 There are urns of coffee and tea and a waiter comes around with jugs as well. The coffee is strong and dark. Curiously they don't appear to have tea spoons. Juice is available.

There is no assigned seating so you can sit wherever you like. 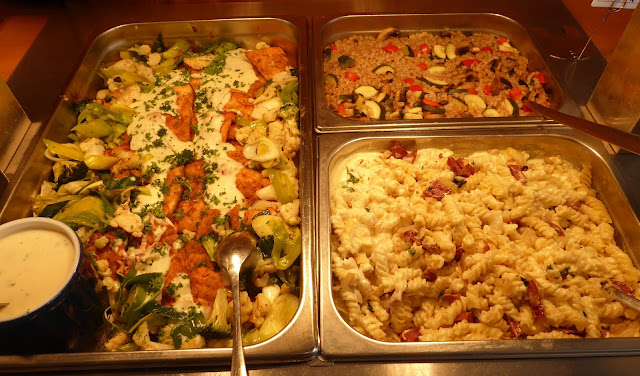 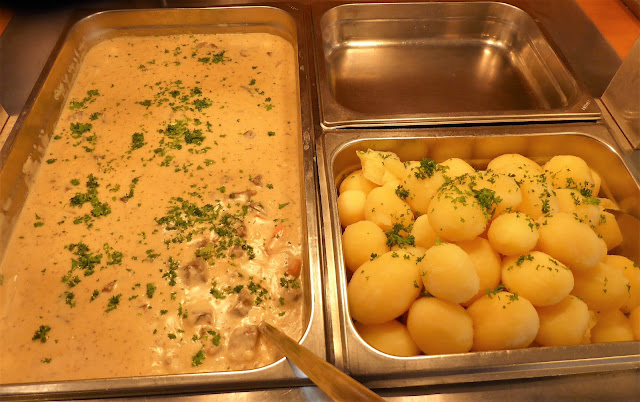 In the left tray was lamb in a cream sauce. Many of the dishes feature cream. 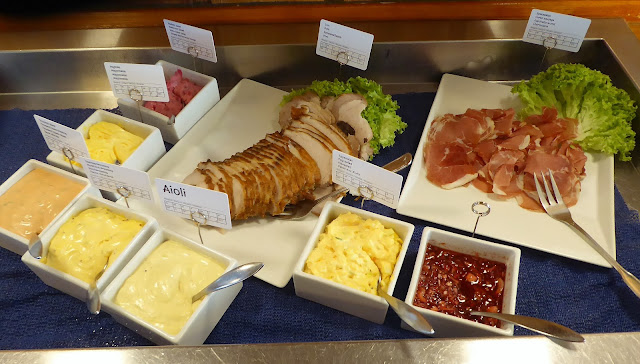 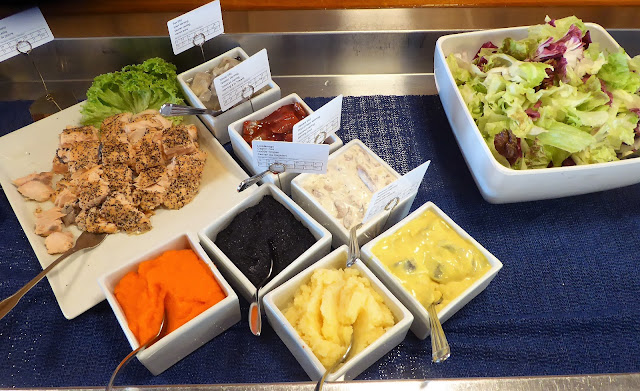 I really enjoyed the peppered salmon to the left. 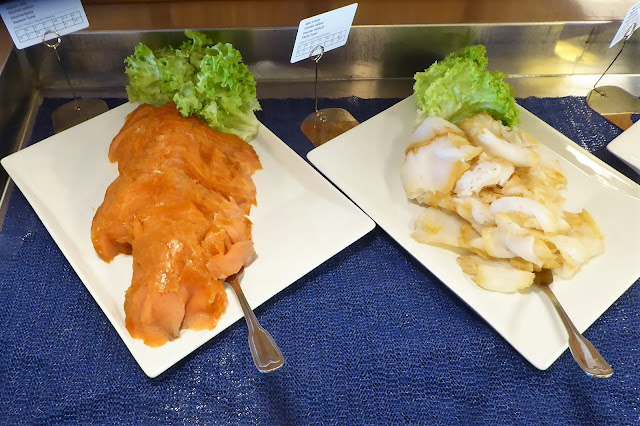 The salmon made another appearance. 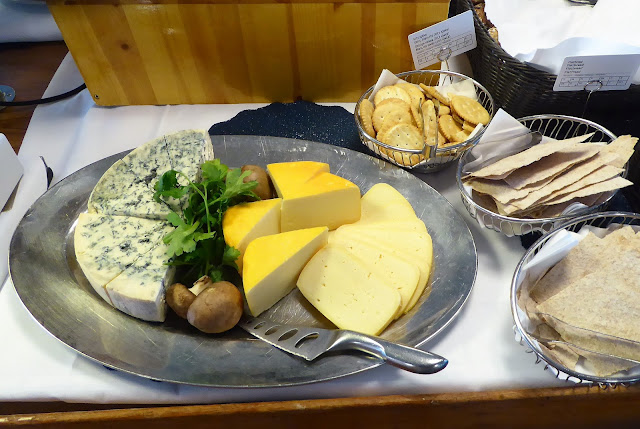 The blue cheese is really good. It is either Danish Blue or something similar. 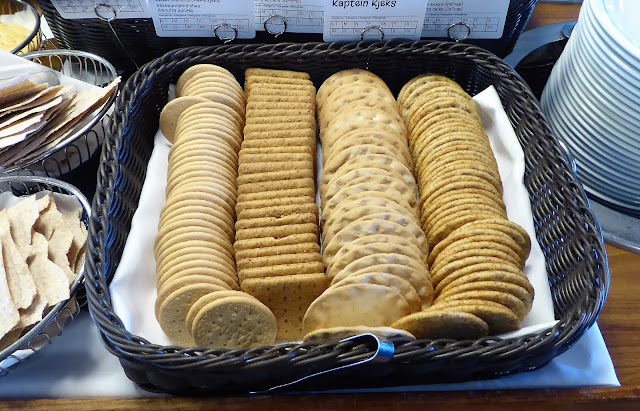 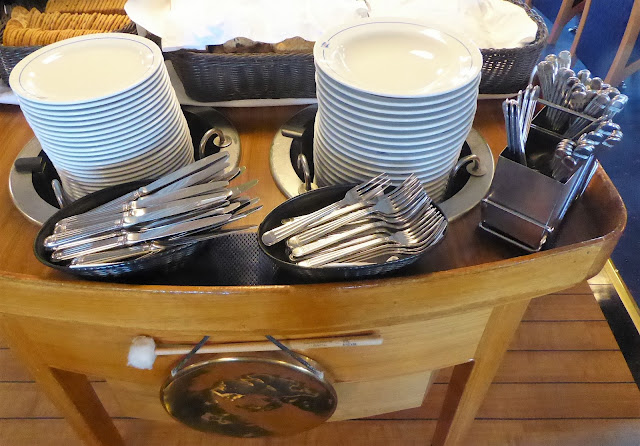 So far I have not heard the dinner gong, but of course I have been well behaved. 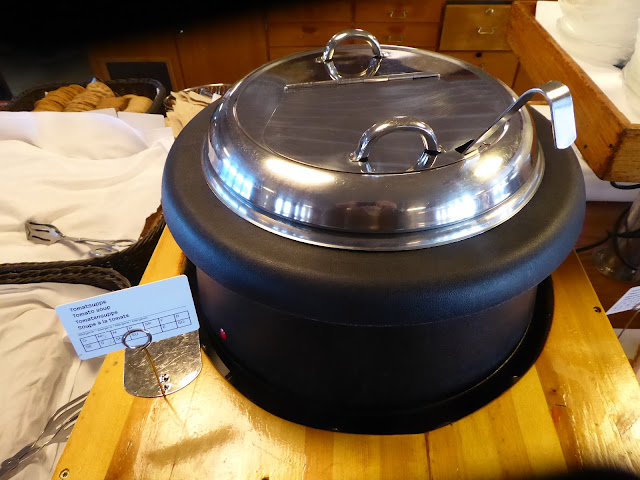 A big pot of soup though I haven't seen too many people lifting the lid. 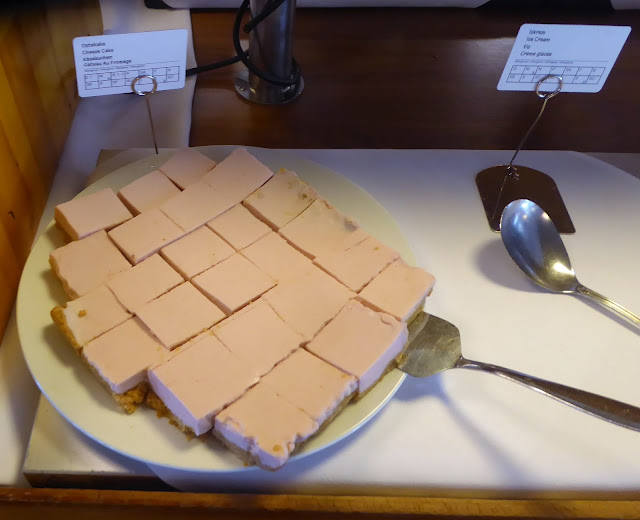 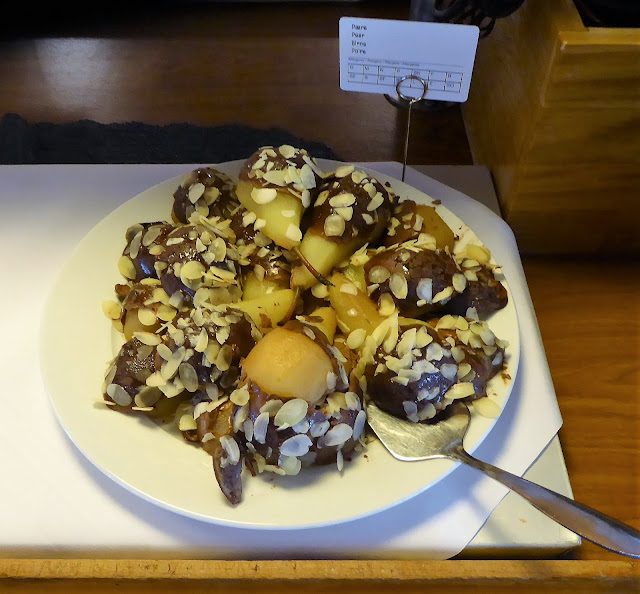 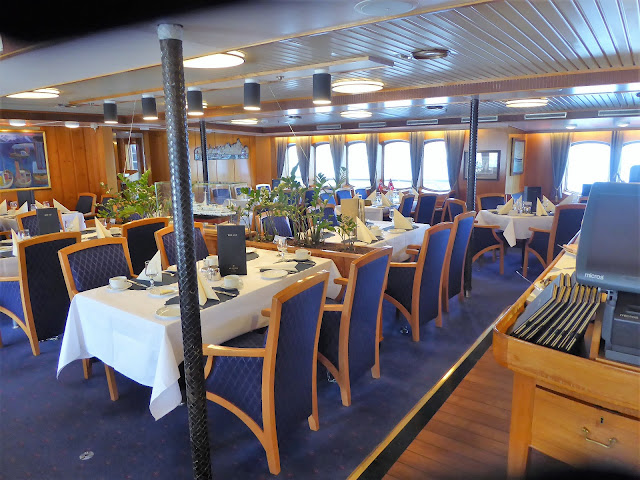 The dining room. During the evening there are two sittings at 6 pm and 8 pm. Seats are assigned so you always meet the same people. We have enjoyed talking to our dinner companions who are both American men who are travelling by themselves. Both have traveled extensively and have done many other cruises. They love the Lofoten and one has done it several times. 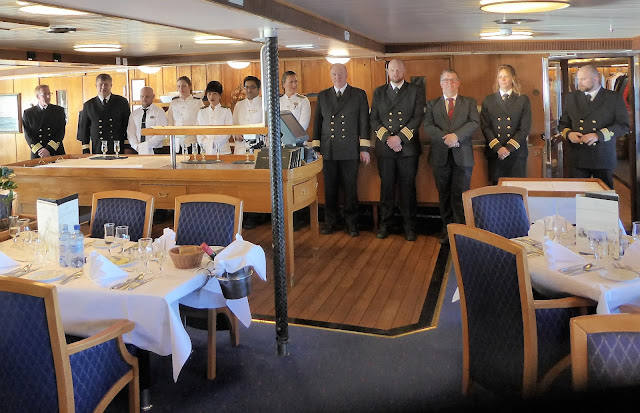 Our dinner this night was a special dinner and the Captain and senior crew joined us. The Captain is on the left. 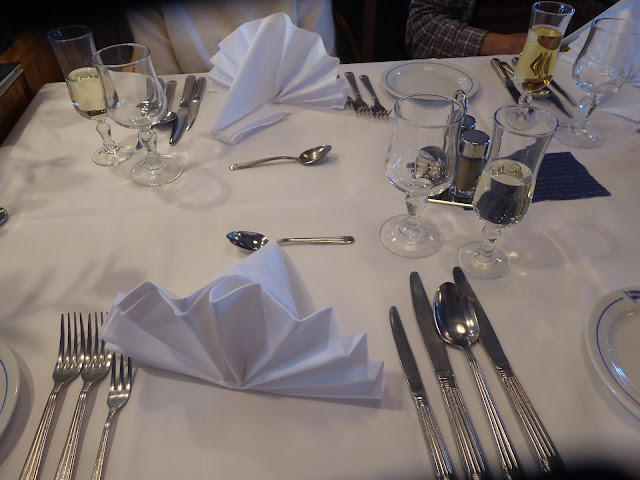 The menu was a bit more special with an extra course but otherwise much the same quality as our other dinner meals. We were each given a glass of champers for the toasts. 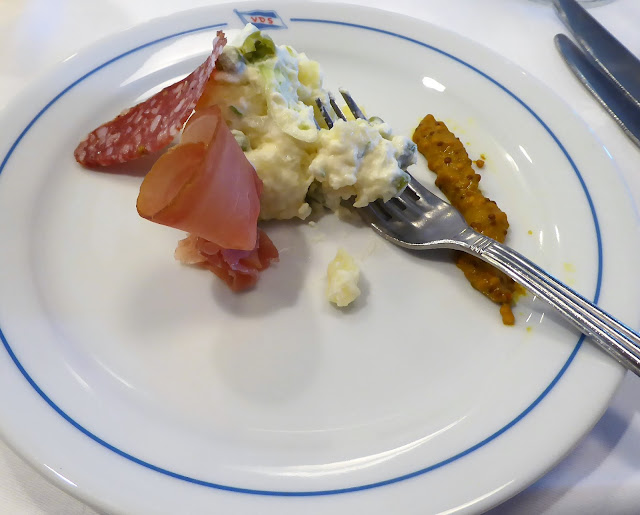 The first course. The white thing was potato salad, a piece of cured ham, a slice of salami and some mustard on the side. 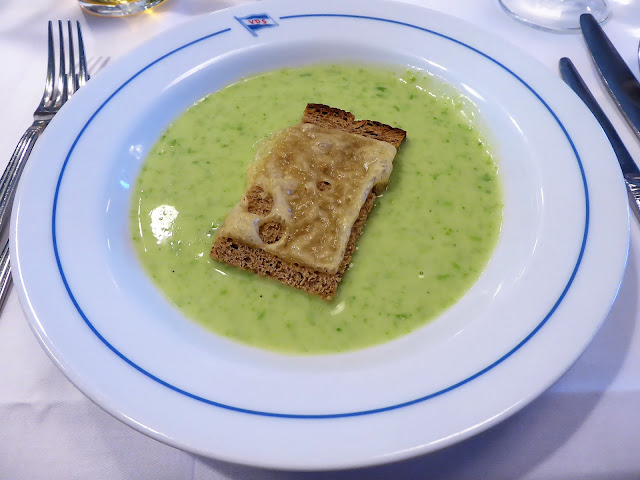 Pea soup with toasted bread and cheese. Unusual with the toast and cheese but the pea soup was really good. 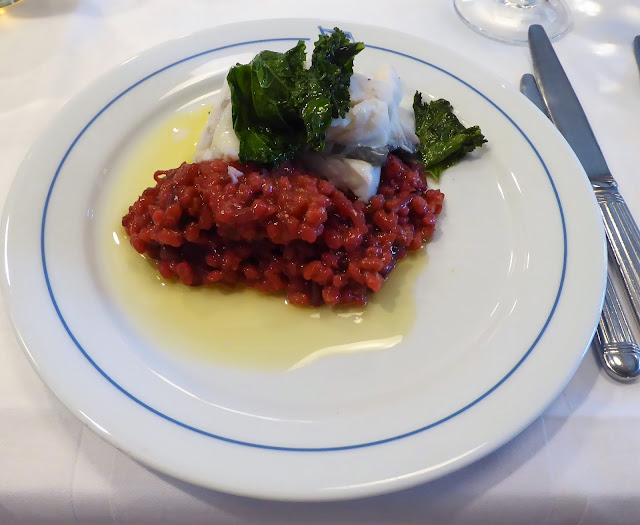 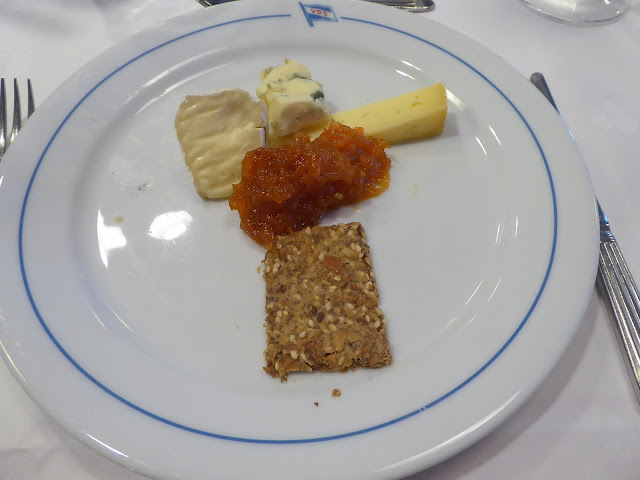 Cheeses with a blob of some carrot, ginger and sugar marmalade type thing..

The kitchen and dining room crew came out for a round of applause. 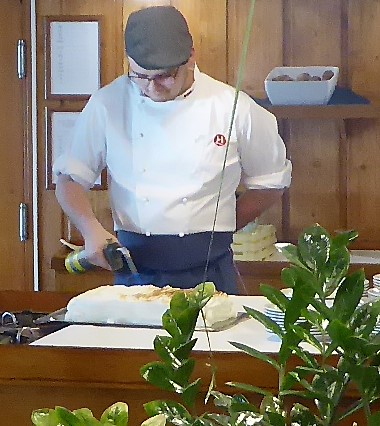 Flaming the top of the dessert. 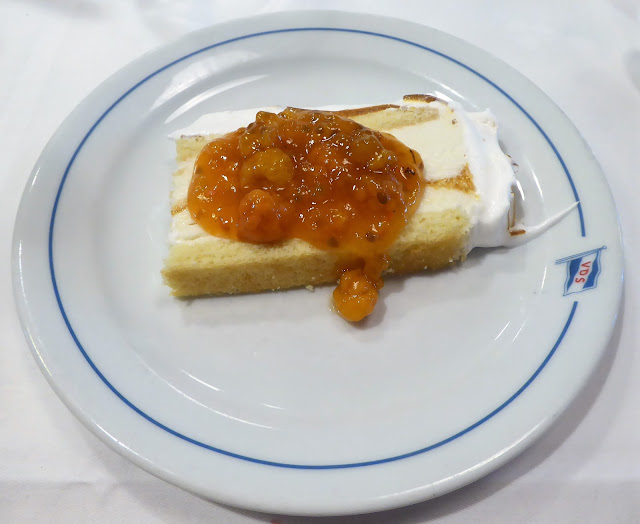 Cake, meringue, ice-cream and a mixture of cloud-berries on top. Very yummy. The other evening meals have been just as good. I have no complaints about the food or service. The waiters are very friendly, observant and efficient.

We have not indulged in wine but I have a half liter glass of beer at dinner.