We had our roughest weather of the voyage about 1 am on the last night of the voyage. The ship passes into unprotected waters and it can get so rough that it is too dangerous for ships to pass. Fortunately I could just lie in bed and I did not feel seasick despite the rolling and porpoising. The pitching lasted for about one to two hours.

Interestingly, Norway is planning to build a sea tunnel to bypass the dangerous bit and you can read about it here. It will be large enough for the larger Hurtigruten vessels to pass through. 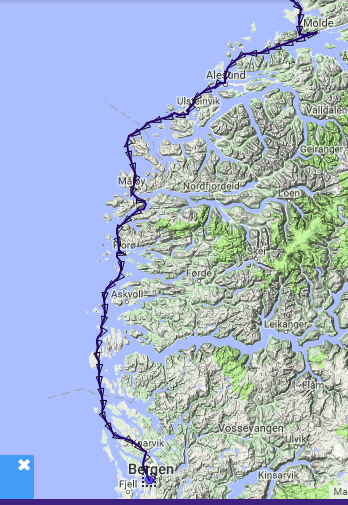 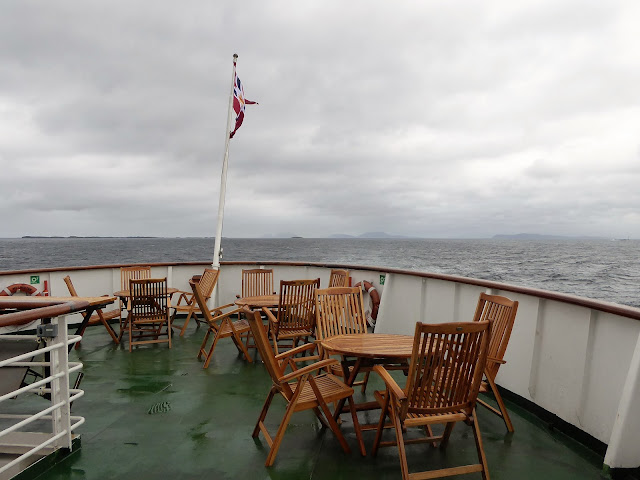 Next morning was misty, cloudy and occasionally wet. It wasn't as cold as further north, but nobody lingered on the deck. 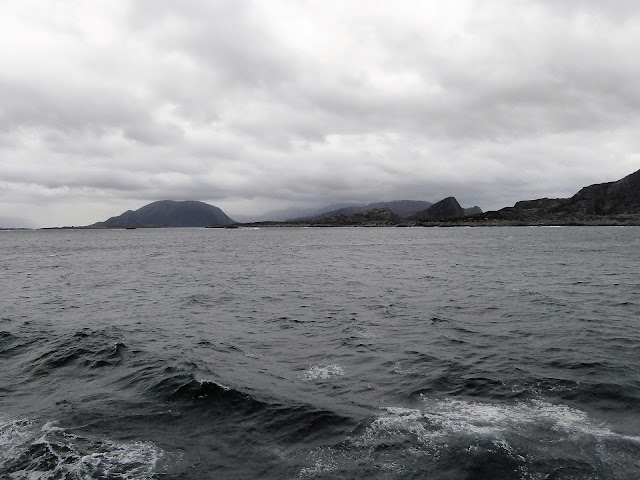 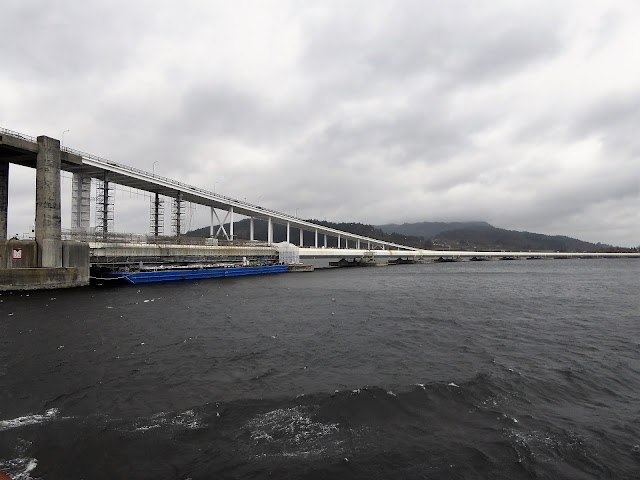 We had to be out of our cabins by 10 am and have our luggage placed outside our cabin door. The Lofoten commences its next voyage to Kirkenes tonight so they need to get the ship clean for the new passengers. We complied and spent most of the time sitting at a table.

We passed under a bridge on the outskirts of Bergen. 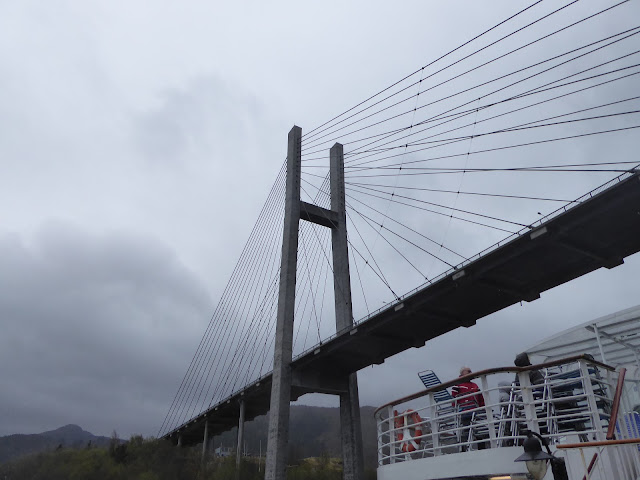 Nobody was taking too many photos. There is a sense of anticlimax and sadness at leaving the ship.  We went and said goodbyes to other passengers we had met on the voyage. Last night we said goodbye to the staff, particularly the waiters at the restaurant. 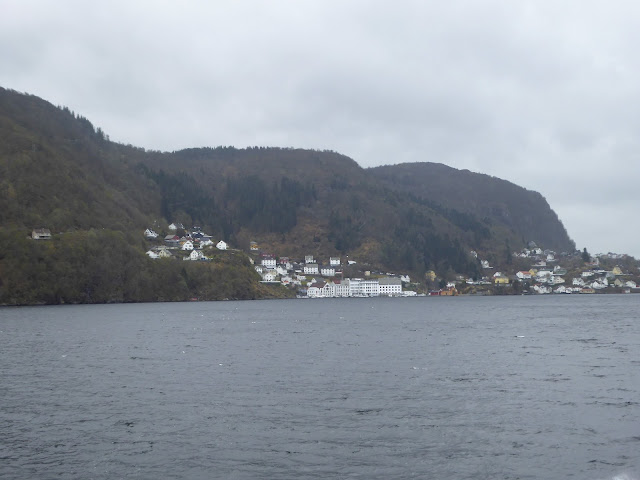 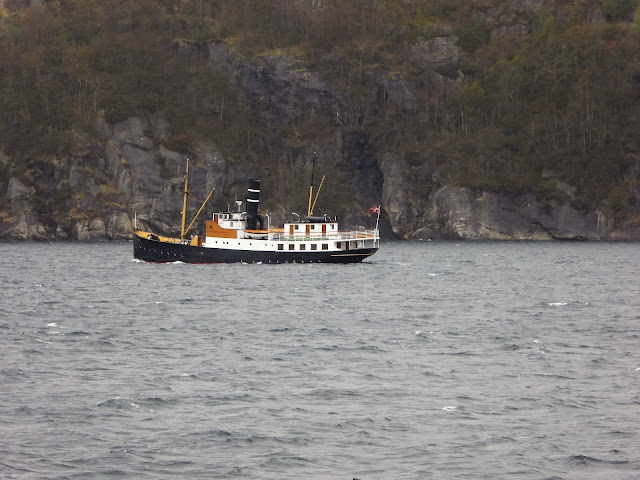 This jaunty little ship passed by. 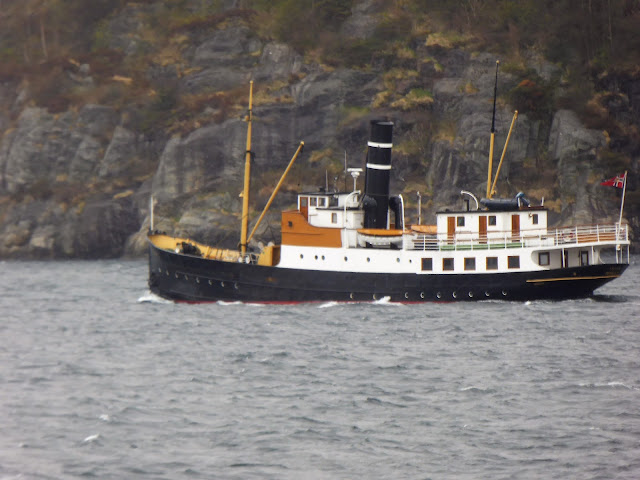 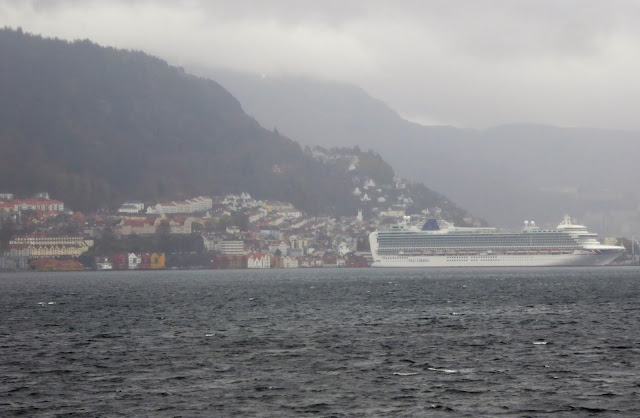 A behemoth parked outside Bergen. 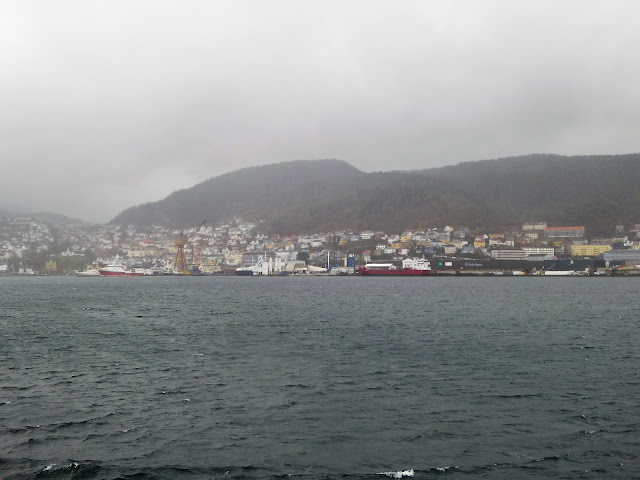 Coming into the harbour. 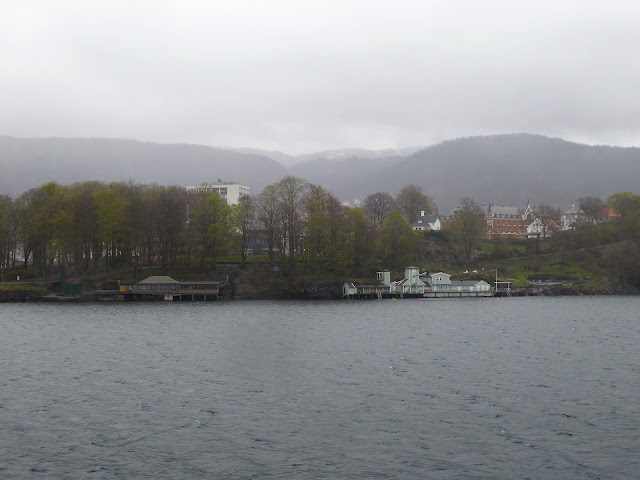 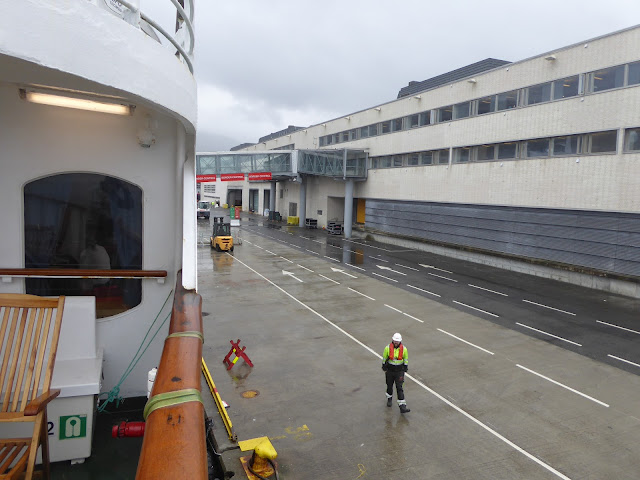 Finally we arrived at the dock where the Hurtigruten vessels leave and arrive. 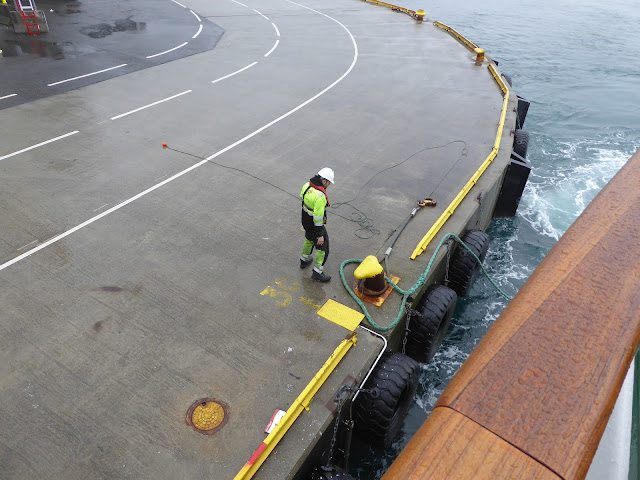 The big line was draped over a bollard and the engine shut down. The voyage was over. 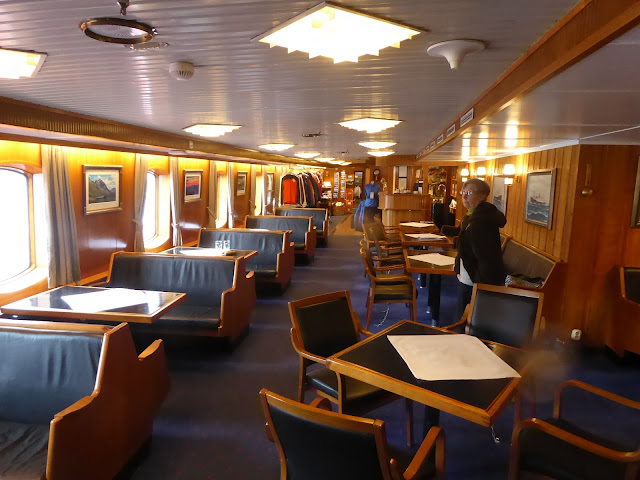 It seemed strange to see the lounge areas empty. 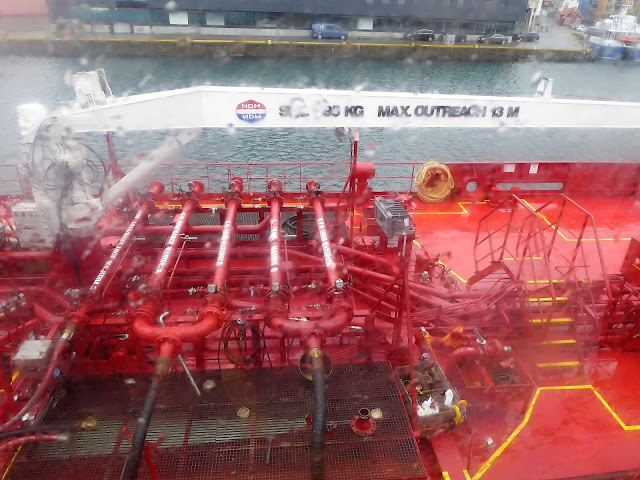 Almost immediately a little tanker arrived to fill up the tanks with fuel for the next journey. 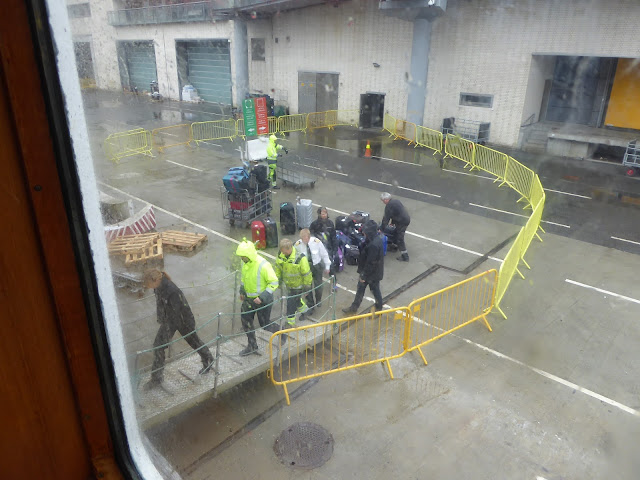 The crew took the luggage off the ship and stacked it on trolleys to be taken into the terminal. The bloke in the white shirt is the Captain who helped. When we got off the vessel he shook hands with every one of us and I congratulated him on helping with that job. He said he liked the exercise but I bet it endears him to the crew. Very smart thinking. 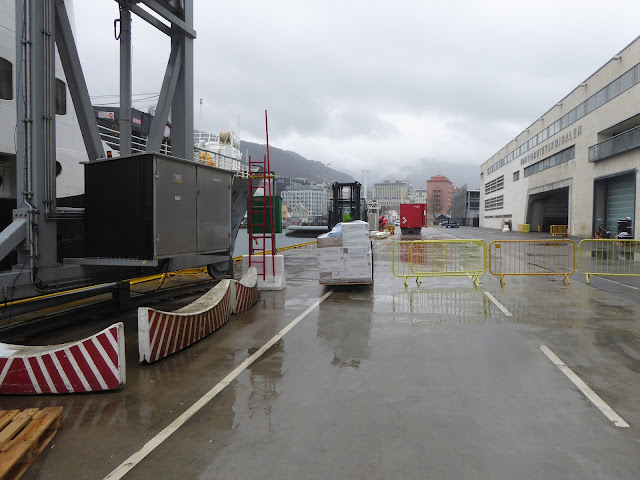 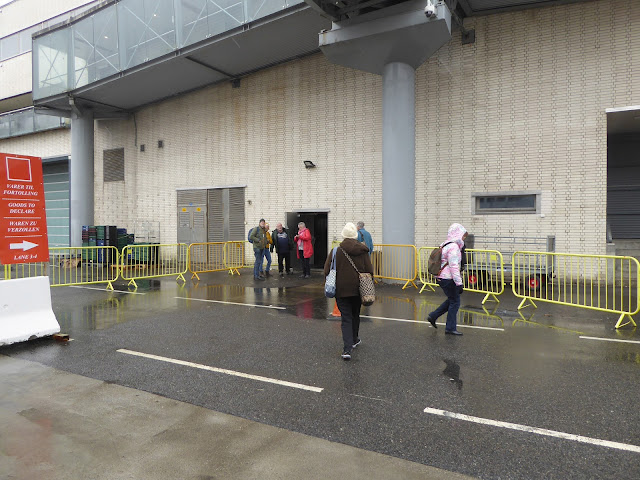 We toddled into the terminal. 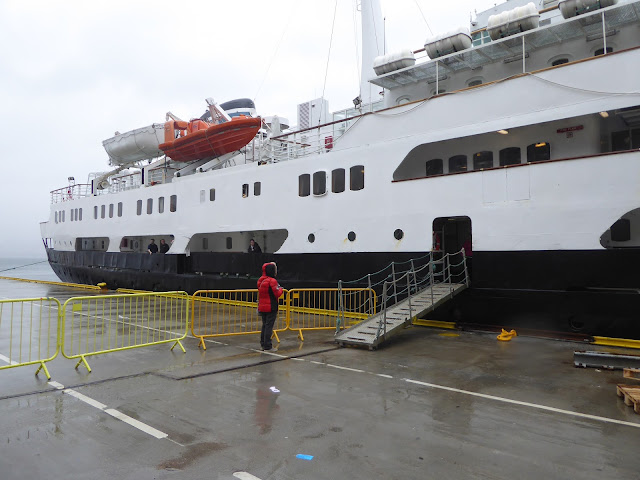 One last look at our ship. We loved our time on it. 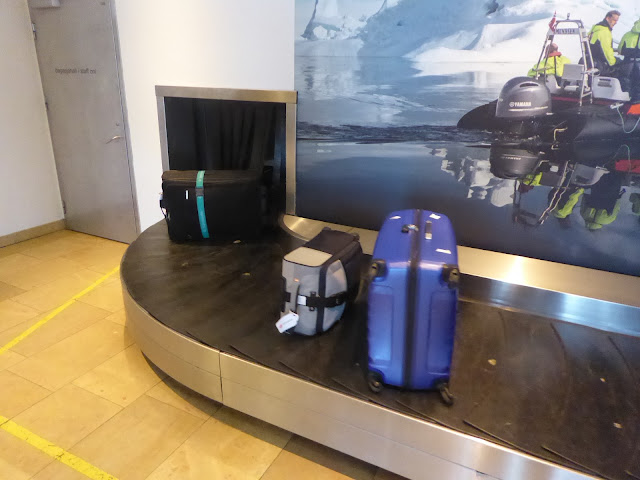 There was a luggage conveyor and eventually our bags came out and we walked off to our Airbnb.